A Chopped down history of Coppicing

Coppicing is an ancient woodland management method, which involves repetitive felling on the same stump, near to ground level, and allowing the shoots to regrow from the main stump. Coppicing is a highly effective method of producing a great deal of fast growing, sustainable timber without the need to replant. As coppiced trees already have a fully developed root system, regrowth is rapid.

Coppicing is done on rotation, where small areas of woodland are cut each year in sequence leaving the areas not being cut to grow on for between 15 and 20 years for Chestnut. When an area of coppice is cut, it is all cut down, and creates a clearing. This periodic coppicing encourages the individual trees to live for up to hundreds of years. If the coppice cycle is managed correctly it can increase biodiversity in the woodland because of the beneficial effects of varying light levels reaching the woodland floor, and the range of different aged trees in the woodland.

Pure coppice is where one species is used, and historically in the South East of England, this has been Sweet Chestnut. It is said that the Romans introduced the practise although evidence has been found that it was practised in Neolithic times.

Sweet chestnut coppice took off in the UK in the 1800s to be able to supply the hop industry with long straight poles. When wire came in to replace them, chestnut coppice woodlands declined, but then a new market emerged for chestnut palings, which revived their fortunes. Traditionally Chestnut has been used for fencing as it is a very durable outdoor timber, however today this allows for a wide variety of woodland products.

Stock up for winter today. 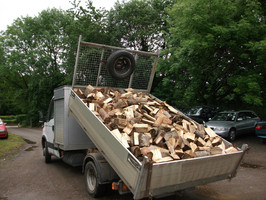 Do you have standing Chestnut Wood or Coppice?

We are always looking to source new supplies. Our expertise will ensure re-newable material for the future. Please call us to discuss or arrange a visit.

Find out more about all of the latest news.